After spending Wednesday night with my mother and stepfather in Saint Paul, I met my brother Tim at Eric’s house in Minneapolis at 6:50 am. Tim drove so I could join a few meetings via phone. Tim rented two Kevlar Wenonah canoes from Sawtooth Outfitters in Tofte, MN on the North Shore of Lake Superior – handy location on our drive to Canada. Lunch at the Gunflint Tavern in Grand Marais was good, but slow. No problems at the border. Stopped at Larry’s Bait in Kakabeka Falls for licenses, camping permits and beer.

The Graham Road was in good shape and we made good time until we had a flat tire at KM 100. Changed the tire quickly to get back on the road before dark. The Graham Road narrows North of Brightsand Lake, obviously no longer logging. The brown Brightsand River Provisional Park access point sign was missing at KM 118, but we found the access and parked the truck at the North East arm of Harmon Lake 49°58’22.76″N 90° 6’40.43″W enjoyed steaks and a few beers around the campfire.

Only one other truck, with a heavy duty trailer was parked in the lot. As we setup camp, a lone fisherman walked in. Turns out that he is from Stratford WI – just 14 miles from my house! Small World! He had fished the area for many years and provided some helpful guidance as we looked at the map.

Friday August 8, 2014
Woke to the sound of two loons flying over the tent. Cooked eggs and bacon with English Muffins and cheese. Packed camp into the truck and canoes. The access path to the water is wide, but muddy and strewn with big rocks. 300m portage to the water, a peaceful bay with a beaver dam to the East. Packed and launched the canoes on a nice day, blue sky and light breeze.

Followed the North edge of Harmon Lake for 4.5 miles. Found the portage trail on the right of the rapids easily. Water was high, the rapids were fast. 50° 0’10.64″N 90°12’35.07″W Very nice camp, high above the start of the rapids. The 175m portage was well used and ends on a large rock expanse.  With the high rock walls, the view along the Brightsand River to Wapikaimaski Lake is lovely.

Met with 2 brothers with their adult sons from Minnesota (one had worked in Owatonna for many years). They had entered Wapikaimaski Lake on the far East end by driving to the end of the Graham Road and waded their loaded square stern canoes with 2.5 hp motors through a muddy stream to access the lake. These would be the last people we would see until we left the Graham Road.

We zigzagged through the glacial cuts of Wapikaimaski Lake until we reached a short 20m portage with a nice camp. While the Brightsand River heads to the North East, we veered to the left (West) towards Seseganaga Lake. After going through one small cut, we quickly found the rapids flowing out (somehow I expected water to flow into the Brightsand River). 50° 4’5.14″N 90°11’5.89″W The portage is on the right before the rapids is easy to see. Well used portage, perhaps 175m with a noticeable elevation drop.

Headed North West, around an island to see the rapids flowing toward Seseganaga Lake. The portage is on the left before the rapids, fairly well used, perhaps 190m, with an elevation drop that ends below the rapids. The small pretty open area at the end of the portage became our home for the next 3 nights. Set up camp in what is technically in the Wabakimi Provincial Park.  50° 4’35.50″N  90°12’23.00″W 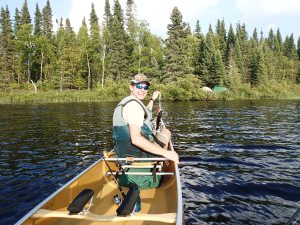 Caught plenty of Walleyes for dinner below the rapids. It was Italian night with fish fillets rolled in Italian breadcrumbs and noodles Alfredo. From the water, the fire pit is behind the tents, which was nice to have the smoke blow away from the tents to the East. Nice camp fire and a bright full moon ended our first night in the wilderness.

Saturday August 9, 2014
With the sun rising in the East over the hill behind the tents and the constant sound of the rapids, the guys slept in. It was cooler, with clear skies and a heavy dew. Enjoyed coffee while I wrote in my journal and studied maps to plan the day’s adventure and future trips. Enjoyed eggs and Canadian bacon for breakfast.

Traveling light with Eric in the solo canoe, we quickly crossed the two portages to the Brightsand River and Wapikaimaski Lake. We headed North East towards Antler Lake. With the river high and flowing North, we ran a small rapids to see a larger set of rapids, with a portage trail on the right. 140M trail was well used, with a beautiful camp high along the rapids.  50° 5’15.76″N  90° 8’30.62″W 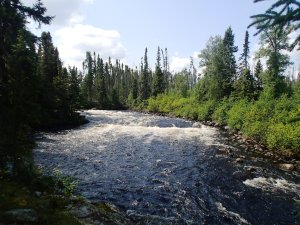 The next portage was not well marked, Tim and I got too close to the rapids and had to wade out. Big deep mud pit greeted us with a few down trees made for difficult 130m portage.  Ran a small rapids as the river narrows, then opens to a small lake. Heading straight ended with a small creek flowing into the river, the rapids are actually on the right side.  50° 5’26.86″N  90° 8’19.08″W

Since we knew that this was going to be a day trip up and back, we set a 2:00 turnaround time to make sure we got back to camp before dark. It was 1:37 and we had traveled 5.5 miles, so we decided to head back. Paddling against the current was tough at times, but we made it up the small rapids, then through the ugly portage and stopped for lunch at the beautiful camp high along the rapids. Had to paddle hard to get up the next step of small rapids, then battled a head wind from the South West for quite awhile. Made it back to the last two portages, then to our camp.

It felt great to jump into the water for a swim to cool off after our adventure. While I caught a nice Walleye on my first cast, fishing was slower, but Tim caught some Northern for dinner.

Tim broke his rod just ahead of the reel on a snag, so he went in to chop firewood and clean fish. Even the Northern tasted great in the Cajun breading with Red Beans and Rice. Nice campfire with a full moon fighting through the clouds. The bright light of the moon woke me up as I watched it shine through the tent screen.

Sunday August 10, 2014
Woke to a pretty morning, with the sun basking the trees on the other side of the river while I was still in the shade at camp. Heard a twig crack behind camp, I turned to see a cow Woodland Caribou standing in the portage trail, just behind the clothesline. Big eyes and ears and a dark brown coat, I first thought it was a moose. We starred at each other for awhile, before she slowly turned to show her white butt. She disappeared quickly into the woods. How cool! 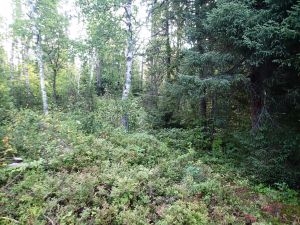 While I reflected on this encounter with a rare Woodland Caribou and enjoyed a cup of coffee and my journal, I thought about how fortunate we had been with weather. I wore shorts the whole week! Watched ducks fly past, just barely over the water. Tim picked fresh blueberries for the pancakes – hard to beat!

The wind kicked up as we explored part of the huge Seseganaga Lake. I was in the solo canoe and had a hard time keeping up, so I hooked up behind Tim and Eric. We decided to fish the backside of a big island to stay out of the wind and caught a few Northerns. Stopped for lunch on an island, where the rocks are cut to be a perfect chair. We could see the black clouds of a storm brewing in the west, so we headed back toward camp. Just as we made the last turn of the river towards camp, a few gusts of wind picked up Tim’s tent and flipped it over. We got to camp to reinforce his tent and secure camp before the storm hit. Rain always sounds loud in the tent, but it came down hard. Read Sigurd Olson’s The Lonely Land and took a nap. The loons called an end to the rain. Tim chopped wood for the fire, while Eric and I went fishing for dinner. I caught a couple of nice fat Walleyes and went into camp to let Tim fish for awhile. Eric caught two more big fat Walleyes, so we scrapped the rice and just ate 10 fresh Walleye fillets – pan fried with Italian bread crumbs. Nice camp fire with fresh split wood. Watched the full moon in the mist – beautiful!

Monday August 11, 2014
Remembered that it was 25 years ago today that I left Fargo ND for Marshfield WI. What a long strange trip it has been.

It was a still, cooler overcast day – perfect for packing out. Guys up early. Tim picked more fresh blueberries to mix with our oatmeal. Packed our wet gear and made our 3 portages to Wapikaimaski Lake. Got lucky as the wind kicked up out of the North East to push us through the glacial cuts of Wapikaimaski Lake. Enjoyed lunch at the portage to Harmon Lake – a pretty spot with rocks high over the rapids. Hugged the North shoreline of Harmon Lake to stay out of the wind. Eric, who used this trip to train for a 24 hour bike race next week, kept up in the solo canoe, until the last mile when the Pelton brothers paddled hard like horses headed for the barn. Portaged gear and canoes to the truck. Quickly packed the truck and loaded the canoes.

Hit the road, driving a bit more carefully without a spare tire. Only saw 1 vehicle in the 118 km to Highway 17. Stopped at the Black Spruce, they were busy and had a new cook. 90 minutes later we had our bacon cheese burgers. Made it across the border without incident. Stayed at the Grand Portage Lodge.

Tuesday August 12, 2014
Up to a bright sunny, but cool day along Lake Superior. Dropped off the canoes in Tofte. Road construction forced us to take a detour near the ELC Wolf Center. After driving Highway 61 for 35 years, it was nice to get off the beaten path for awhile. Lunch outside at Canal Park Brewing in Duluth was a nice way to end a fun trip!

2 thoughts on “Brightsand River from Harmon Lake to Seseganaga Lake”