With oldest granddaughter Brianna in college, it was time for the next oldest – Grace who will be 15 in August, to make her first canoe trip!  I realize it is my first return to the BWCA since making two trips in 1981 and 1982.

Made the long, but pretty drive to Ely, MN (337 miles 6 hours).  Checked in at our outfitter, Piragis Northwoods Company.  They were very organized, the BWCA permits were ready and we went through the food we ordered for the trip. The mix of fresh and freeze dried food was mostly sourced from local businesses.

Enjoyed a unique beer from Bauhaus Brew Lab called Wonderstuff – clean, fresh and refreshing on a warm day, as well as a poutine burger at the Rockwood Bar & Grille.  Stayed in Budget Host Motel – clean, simple room.  the owners were very friendly and offered a light breakfast in the office.  We were excited for the trip!

Up early, but the wind was already blowing.  Followed Hwy 169 through Winton, the road changes to County Hwy 18 or Fernburg Rd which ends at the landing at the Lake One Access.  Loaded the boats, parked the truck and we were off with Grace in the canoe with me and Kara in the kayak.  Bright blue skies and calm waters in the protected channels as we headed for the North West arm of Lake One.  A bald eagle greeted us, soaring high above us – I thought it was a good omen. 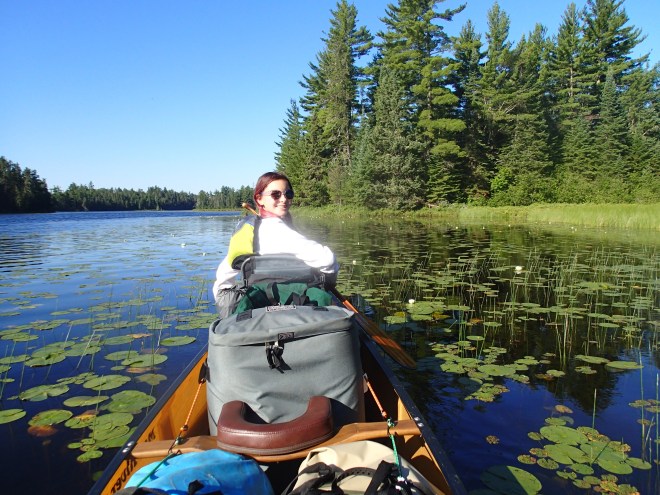 Strong winds met us as we got out into the open water.  We hugged the north shoreline, ducking behind islands to find temporary relief from the winds.

We found that we needed to put all four big packs right behind Grace to balance out the canoe with Grandpa in the back.

Made the two (30 & 40 rods) portages into Lake Two.  These are very busy portages.  Met a diverse collection of young families, church groups and older paddlers – all enjoying this beautiful place. 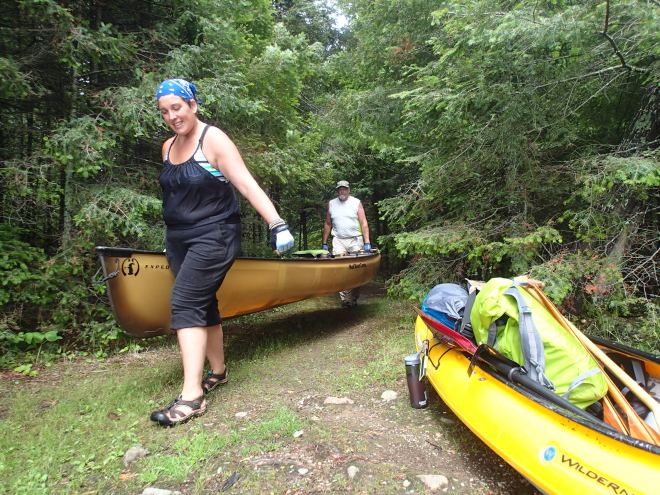 Again hugging the north shoreline, we stopped for lunch at a quiet cove.  While we had planned to make it to Lake Four, given the wind conditions, we decided to take the next open camp site on Lake Three.  We found a beautiful campsite, nice fire ring surrounded by logs, several nice openings for tents and the breeze from the west kept the bugs down. 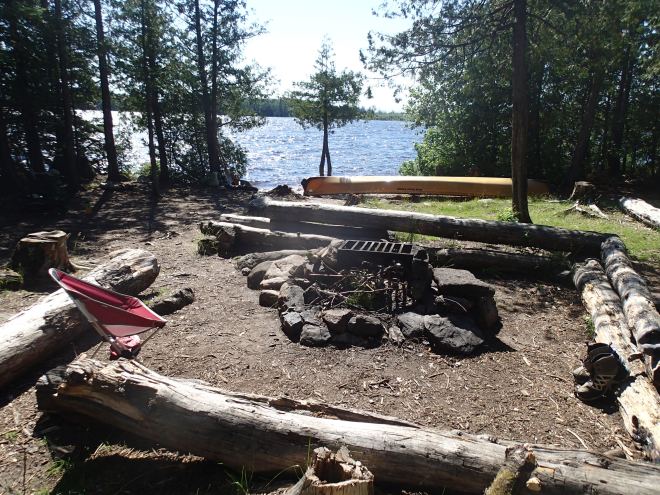 After setting up camp, we enjoyed a nice dinner of red beans and rice with sausage, spicy and tasty, but it would have tasted even better with a cold beer. Apple cobbler dessert was a treat. A nice campfire ended a fun first day.

Storms rolled in over night.  When the rain quit, we made a nice breakfast of eggs and sausage under the rain fly, but the next band of storms forced us into our tents.

Our plan had been to pack up and paddle the circle route through Fire and Hudson lakes. We studied the maps to find a day trip we could make in between periods of rain.

We decided to try to paddle to the south end of Lake Three and find the portage to Horseshoe Lake.  The Horseshoe has a special meaning now, after the removal of a benign brain tumor left a scar in the shape of a horseshoe on Kara’s head.  Her hair is growing back nicely, but the memory remains. 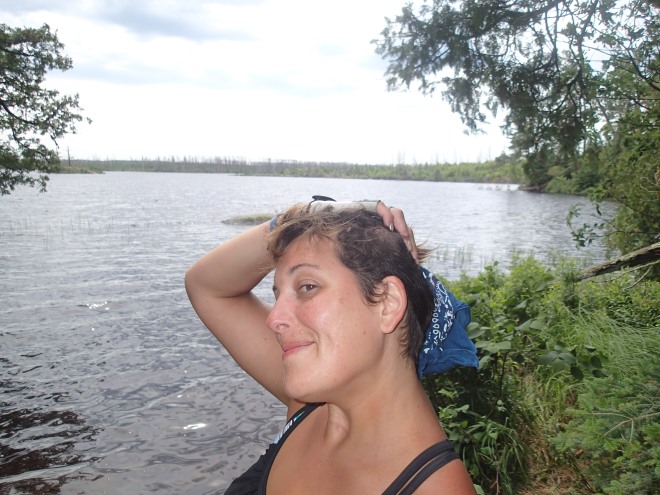 Horseshoe lake was impacted by the 2007 Ham Lake fire.  Amazing to see the damage remains after 11 years!  The Pow Wow hiking trail was closed due to down trees.  Grace thought it looked like a scene from the Lorax movie.  Fire also renews the forest – the thick fresh growth of pines are covering the hills again for future generations to enjoy.

We got caught in a strong, but brief thunderstorm on Horseshoe lake, but it passed quickly and we enjoyed a lunch of peanut butter and jelly sandwiches on Pita bread.  We made the portage back to Lake Three.  Grace in the kayak was having a hard time keeping up with Kara and I in the canoe, so we tied a rope behind me in the canoe to the front of the kayak.  As we got into the open water, a gust of wind blew off my hat and became stuck on the rope.  We backpaddled close enough where I though I could reach for the quickly submerging hat, but I could not, so I pulled the rope, which tilted the canoe as both Kara I leaned over the side and into the water we went.  I grabbed the hat and our personal packs were tied to the canoe.  Fortunately the water was warm and neither of us were hurt.  Grace calmly retrieved the water bottles and Kara’s paddle.  We were close to shore, so we slowly pushed the half full canoe to shore.  We pulled the canoe up on the rocks to empty out the water.  We got back in the canoe and off we went again.

After exploring Lake Four, we paddled back to camp to dry out.  With dry clothes, we made pizza for dinner.  Grilling the pizza crust in the fry pan and using the big pot cover to bake the pizza and melt the cheese.  Pepperoni pizza in the wilderness was quite a treat!  Kara and Grace experimented in making pizza S’mores by melting the chocolate and marshmallows on the pizza crusts, sprinkling crumbled graham crackers to complete the dessert – yummy!

Another round of thunderstorms at sunset, took away our chance for a campfire and chased us into our tents for the night. 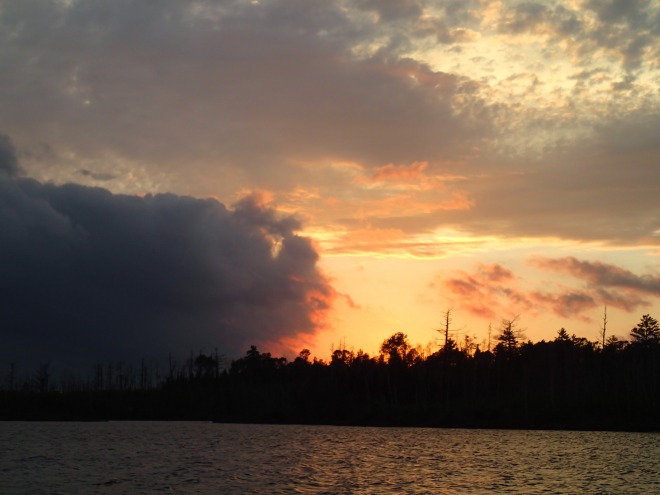 The morning broke clear blue skies and calm waters.   Breakfast of eggs and sausage was complimented with Kara’s freshly baked bread!  We packed up camp, still wet from the last full day of rain.

Grace had a burst of energy, paddling with a nice strong rhythm.  Kara had trouble keeping up in the kayak.  Grace’s energy continued as she wanted to carry the heavy kitchen pack across the portage to Lake One. 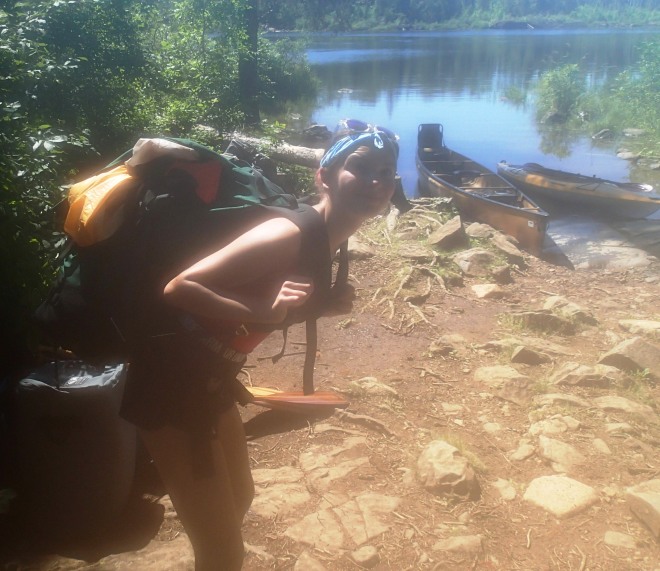 We noticed that most of the campsites on Lake One were already taken, so we thought we should grab the next available site.  We found a site along the channel going back toward the Lake One landing.  The campsite was a mess!  Someone had tried to burn the huge logs that typically people could sit on around the campfire.  The fire pit was filled with partially burned garbage and Kara found 8 potatoes, wrapped in aluminum foil, left in the fire pit.  A trench was dug around one of the tent sites.  These people clearly did not watch and follow the instructions provided in the video we saw when we got our permits!  Kara cleaned everything up nicely, packing out the trash in our garbage bag.

Tents were up, clothes and gear were hung up to dry.  Grace is a friend to all creatures, naming the minnows and got very close to this beautiful butterfly. 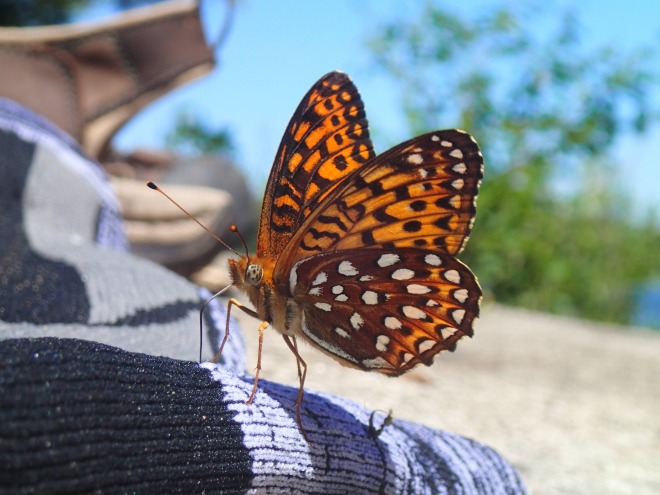 Grace enjoyed sitting on the rock, watching the turtle rise and swim.  While I thought it sounded more like a train whistle, the loons responded to Grace’s call.  Grace learned many things during this trip, including how to ask for a knife like Crocodile Dundee

Grace took a nap, so Kara and I paddled west along the north shore of Lake One towards Carefree Lake.  Just the thought of heading towards Carefree was relaxing.  Back in time to make Grace’s favorite meal – macaroni and cheese.  The freeze dried version was easy to make with just boiling water in the packets.  The mixed berry cobbler dessert was a wonderful treat. The winds died down for a nice campfire at sunset, but the bugs forced us into the tents. 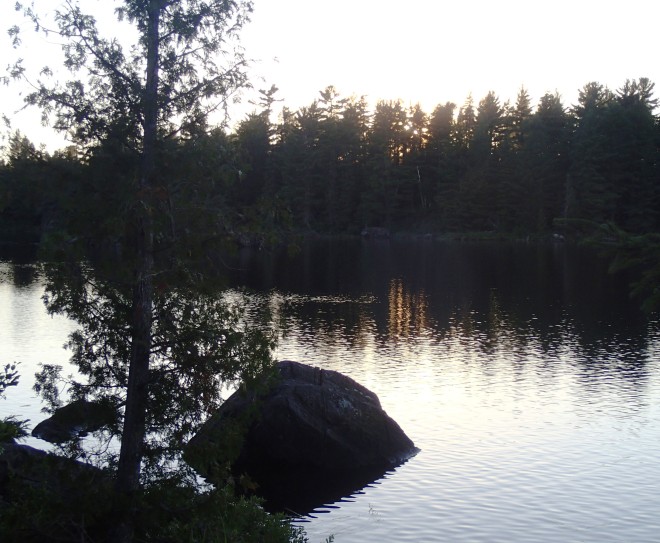 Woke up early to enjoy the sunrise colors and the mist over the still waters. 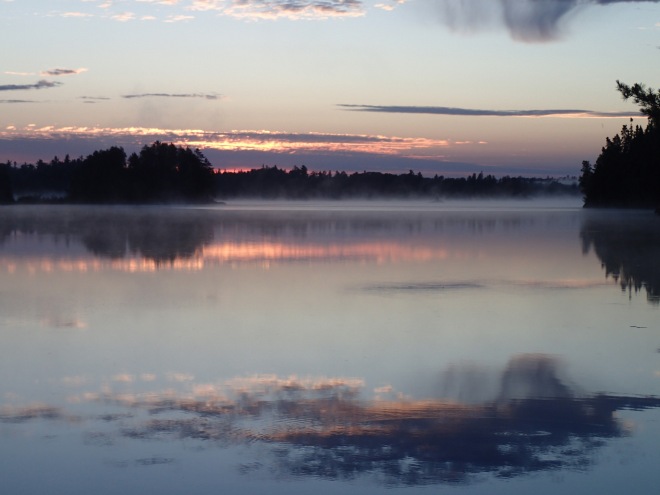 A fresh pot of coffee and a breakfast of hash browns, eggs and bacon prepared us for our last day.  We broke camp, packed up the canoe and we were off for our short paddle back to the Lake One landing.  As we were not quite ready to leave, we stopped to photograph the white lilies (named for Grace’s friend) and this beautiful area.

Quickly packed the truck, loaded the boats, changed clothes and we were off – heading back towards civilization after a wonderful trip.

The GPS shows how we wondered about for a few days in the wilderness. 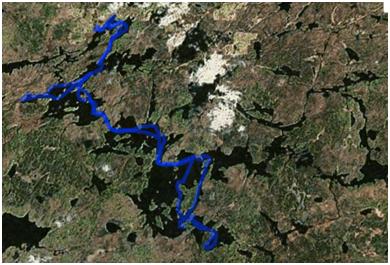 Reflecting on the words of Henry David Thoreau “Live each season as it passes; breathe the air, drink the drink, taste the fruit, and resign yourself to the influences of each.“