Friday, Jun21, 2019
With oldest granddaughter Brianna in college and the next oldest Grace working, it was time for Kara’s youngest, Alex (aka AJ is12), to make his first wilderness canoe trip!

The Sylvania Wilderness is an 18,327 acres protected area located a few miles west of Watersmeet in the Upper Peninsula of Michigan – just across the Wisconsin border. Sylvania is located entirely within the bounds of the Ottawa National Forest and is managed by the US Forest Service.  It is a very unique place, without ever being logged, it has huge mature trees and 30 small clear lakes. Paddle Planner has a nice interactive map to help you plan the route and choose campsites.

We loaded the boats and packed the truck the night before, so we were on the road at 8:00am with a stop for brunch in Eagle River. Registered at the Sylvania Wilderness ranger station, watched the video and consolidated some of our packs. We unloaded the truck and put in at the north end of Crooked Lake.

As we were ready to push off shore, a boat pulling a fully loaded canoe pulled up with two 70 year old guys just finishing a week long fishing trip. One guy had lost both feet and two fingers, so he had two prosthetic feet with hiking boots. We helped them unload their gear and load the canoe on the trailer. We had to admire the determination and positive attitude of these two friends that did not let anything stand in the way of their enjoyment of the wilderness together!

As Alex perfected his paddling stroke, we paddled generally south on Crooked Lake to the Badger 1 camp without a portage. We had stayed at the nicer Badger 2 campsite in 2017. The camp sites at Sylvania are set back from the water and often on a ridge. You hardly notice the camps when paddling on the lakes – very pretty and pristine. Water levels were very high, making the landing mucky.  The bugs attacked us immediately, so head nets allowed us to function.

Alex found his bivouac tent to be very small and claustrophobic, so he decided to bunk with Mom.  Flat tent pads were tough to find, but we quickly setup the tents.

OLYMPUS DIGITAL CAMERA
We decided to explore with empty boats and tackled the 112 rod portage to Clark Lake right away.  There was a large group of kids, mostly 13 year-olds being directed by three experienced 16 year-old councilors with 5 canoes. They were very polite and respectful to make room for us at the landing.  I took the canoe over to Clark Lake while Alex and Kara tried unsuccessfully to bucket carry the kayak.  I came back quickly to help Kara.  The beautiful sandy shore of Clark Lake was a perfect place to wash up and cool off.

We explored the South and West end of beautiful Clark Lake.  Kara does so well in the kayak.  The 5 gallon water jug strapped  to the back of AJ’s seat to helped balance the load. 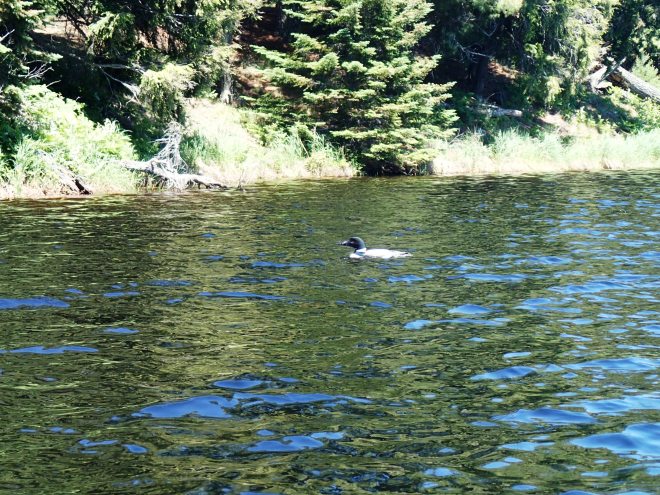 The sky became more overcast as the sun was setting.  The wind picked up and we had a slow and tougher paddle back to the portage.  Kara found that it was easier to carry the kayak over her shoulders.

After dumping the water jug out before the portage back to Crooked Lake, we had a difficult time navigating the short paddle to the Badger 2 campsite.  The sun broke through the clouds as we got into the calm waters closer to camp, which made this picture quite spectacular! 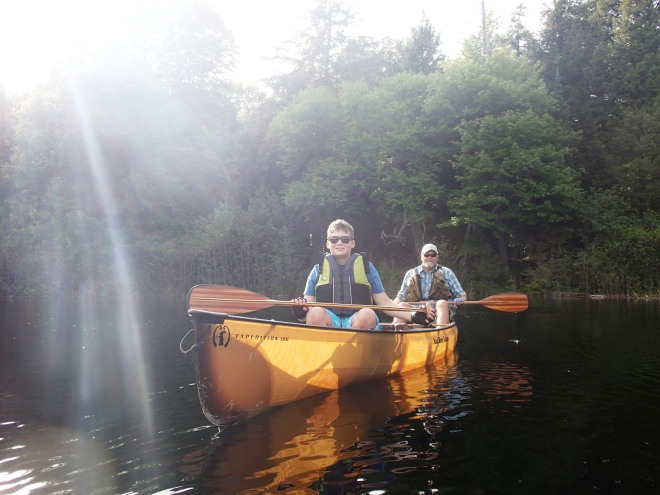 As dusk approached, the mosquitoes attacked us when we returned to camp, scrapping our plans for a big dinner.  I am reminded of John Bigsby, who traveled what is now the BWCA in 1823 as part of a British commission to determine the borders. He wrote in his diary that “the mosquitoes were in the billions. As soon as the tread of man gave notice of his approach, I saw them rising to feast.” With our head nets on, we were able to slice up some sausage and cheese to supplement the trail mix for nourishment. Once we collected dry firewood and got the fire started, the bugs were almost manageable.  The skies cleared and the wind died down for a nice sunset on the longest day of the year. 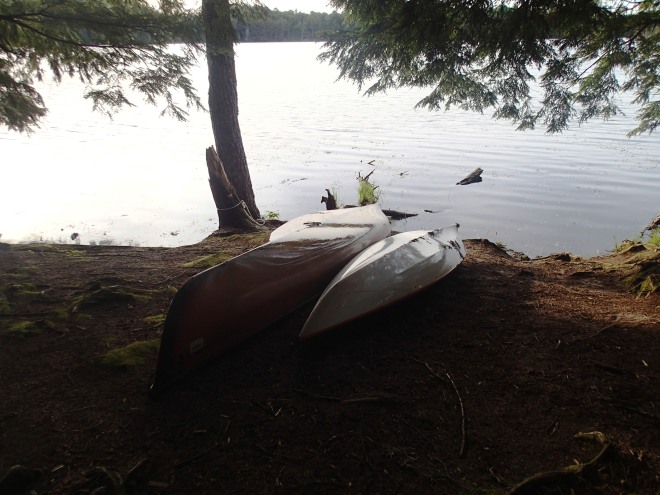 Clear skies dropped the temperatures overnight and reduced the bug problem.  I was up early to write in my journal and read while making coffee.  The lake was like glass!

Kara added eggs to the Garbage Can breakfast (hash browns, sausage, onion and spices) she prepared at home and double wrapped in aluminum foil. She cooked the meal over the fire. After a light supper the night before, the hungry crew devoured this tasty and filling meal. We broke camp and loaded the boats to head to the short 13 rod portage to Mountain Lake. Ermine-1 is a very nice campsite on the west side of beautiful Mountain Lake. 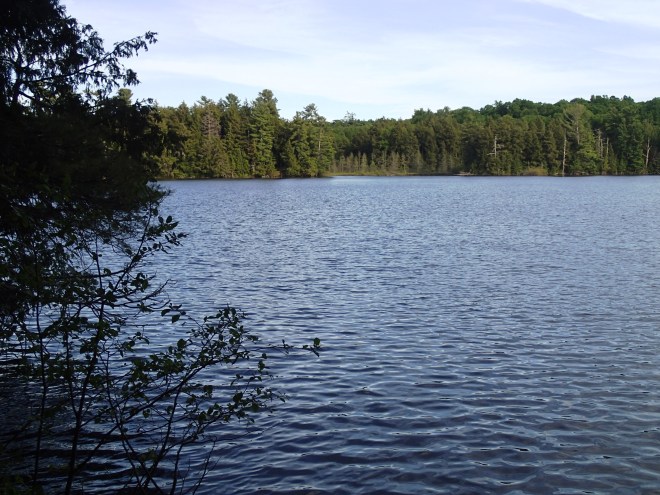 We wanted to explore East Bear Lake, so we decided to team up and take just the canoe, with Alex sitting on the pad on the floor of the canoe. The mosquitoes greeted us at the landing. Kara and Alex pulled on their head nets, Alex put his sunglasses over the head net, which made me think of the classic black & white movie The Invisible Man. 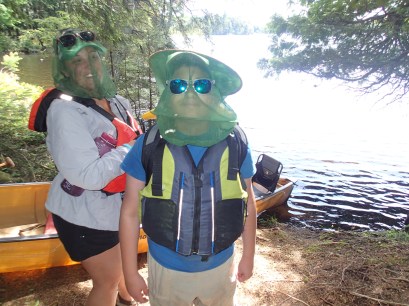 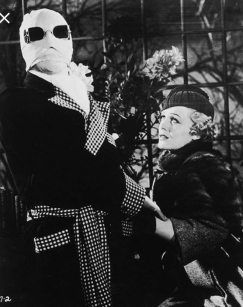 We paddled around East Bear Lake looking for the portage to West Bear Lake without success. The park ranger had warned us about the bugs in this area, so we decided to head back early to Mountain Lake. When we got back to camp, Alex collected firewood and started the fire.

I had time to write in my journal while Alex learned to whittle sticks into toothpicks.

We all thought Mountain Lake was so pretty, we took a moment to reflect on the beautiful and quiet of this special place. 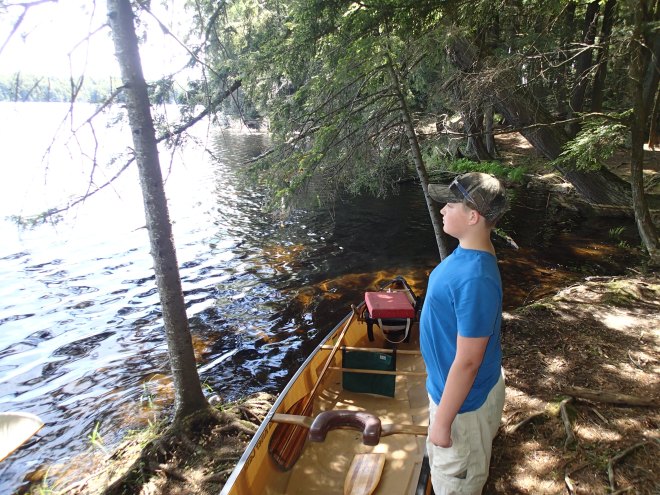 Kara reflected on her brightly colored toenails after enjoying a refreshing swim.

We found two nice stumps that made for a perfect kitchen and allowed me to make pizza two at a time.

A nice breeze and a great fire kept the bugs down and allowed for great conversation around the campfire.  Alex wanted to hear stories from other camping trips, so I told him about our annual trips to Canada (see stevepelton.com ) as well as camping and canoeing with my brother and parents when I was a little boy.

The clouds rolled in and it was not as cold overnight.  A breeze out of the Southeast made keeping the stoves hot difficult.  I made AJ’s favorite breakfast of pancakes, syrup and breakfast sausages, but they were not exactly works of art.  With rain in the forecast, we broke camp quickly.  Alex did not want the trip to end, but we loaded the boats and headed toward the truck under mostly blue skies.

We crossed the buggy portage from Mountain Lake into Crooked Lake, which we followed to the landing on the North end.  We saw a few Loons that got pretty close to the boats.  The Loons are nesting on the islands and can be quite defensive as we paddled past.  One Loon put on quite a show, flapping her wings and crying out to her partner.

We loaded the truck, tied down the canoe and kayak and we were on our way back to civilization. What a wonderful trip!